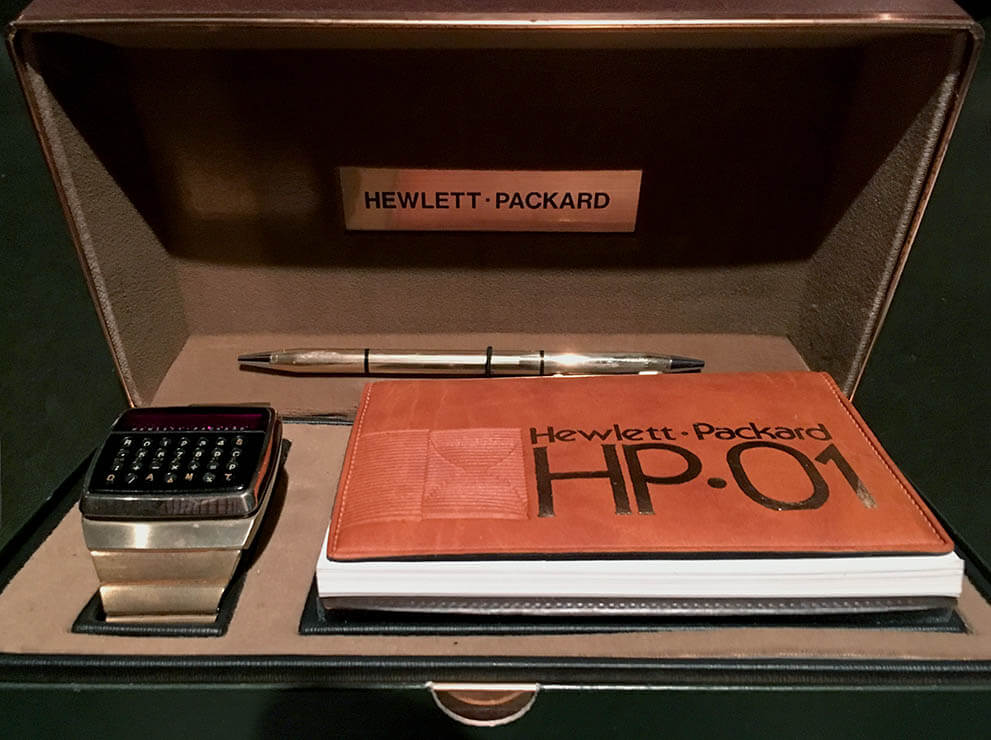 Even the cynics — and there are plenty of them — have to admit the Apple Watch is gaining momentum. And it’s a good thing for all who hope to play in the smart watch category. The Apple Watch doesn’t quite have the same velocity as the much more immediately disruptive iPod, iPhone or iPad had in their categories. But it’s momentum, nonetheless. And I’m now more convinced than ever that the smart watch will be occupying valuable wrist space for years to come.

A smart watch can be truly smart when it ‘interacts freely’ with other things.

The proof points Apple offered up at last week’s event got me thinking. What is it that really makes a watch smart? And what will it take for the smart watch to take that next step and become a truly mass product category?

Many believe the smart watch still needs a “killer app.” Sure, that would help. But as I thought about those questions, I realized there’s more to it than a killer app. If it was just about a killer app, there was a “smart watch” that came out a while back that might have been a bigger deal. And when I say a while back, I mean almost four decades ago.

“It’s a digital electronic wristwatch, a personal calculator, an alarm clock, a stopwatch, a timer, a 200 year calendar…and yet it is more than all of these.” — HP-01 product manual 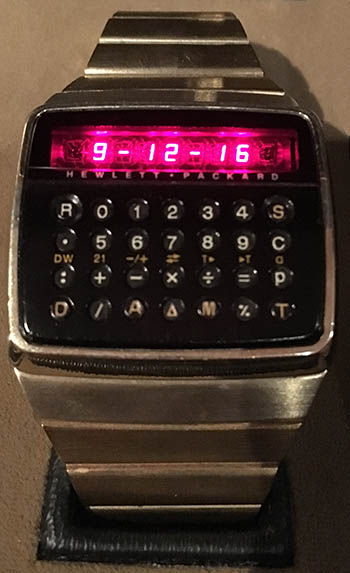 My career in technology began in 1979 at Hewlett-Packard, which of course is now known simply as HP. Jimmy Carter was president of the United States, and it was the year after the first computer was installed in the White House. It was also two years before the introduction of the IBM Personal Computer.

In 1977, two years before I started my eight-year stint at HP, the company boldly introduced the HP-01 Wrist Instrument. When I started, the company was offering employees the chance to purchase this first-ever combination calculator and wristwatch. I, of course, had to have one.

Featuring an LED digital display, onboard memory and tiny keys that could only be pressed with a stylus, the HP-01 was an engineering marvel. In a compact form, it could perform some remarkable tasks, like telling you the exact day of the week of any date you choose, from 1900 to 2099.

At the time, it was considered to be pretty darn smart. And this combination of a watch and calculator, especially for those working in business before the proliferation of computers, was a killer app for some. However, this technical marvel was clearly ahead of its time — which prevented it from becoming a commercial success. Through no fault of HP, there was something missing.

“Only when the time and computation functions are allowed to interact freely can the full potential of the combination be realized and significant new capabilities be made available.” — Hewlett-Packard Journal, 1977 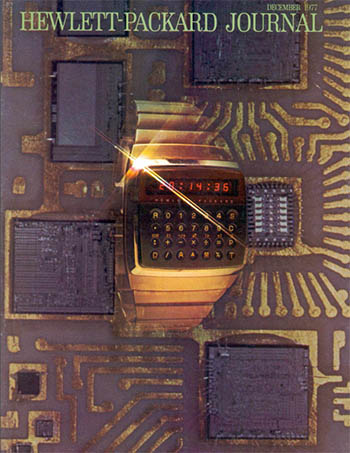 Thinking about the HP-01 in the context of today’s smart watches, the fundamental difference is pretty clear. The HP-01 lived in isolation. It was in some ways genius, but it literally couldn’t get outside of its own head. With no way to input data, the HP-01 couldn’t learn anything from the world around it, and it had no way to interact with other devices — in part because there weren’t any other devices.

The Hewlett-Packard Journal from December 1977 foreshadowed the importance of interactions among future smart things. As the passage above noted, the HP-01’s time and computation functions could “interact freely” — and this, HP said, was the key to “significant new capabilities.” The interplay of the clock and computation abilities are what allowed the HP-01 to do things like tell you the exact day of the week of a future calendar date and year.

Of course, that interaction was limited to the information and hardware contained inside the HP-01 watch housing. The capabilities and intelligence of the HP-01 were fixed at a moment in time, when the watch rolled off the manufacturing line.

I wrote earlier this year about the Interaction of Things, and how the real brilliance and potential of the IoT comes from how smart devices — and their smart human owners — interact. Today’s mobile devices and connected “things” are contextually aware, constantly interacting with other data and devices, and learning from our behavior and our habits.

The Apple Watch is getting smarter with each day. The brains on board the Series 2 version have improved, but the evolution of the Apple Watch has more to do with the growing number of ways it can interact with people, devices and software — all things outside of the watch case itself. Four decades after the HP-01, the time is right for a truly useful smart watch because of the IoT ecosystem around it.

From a user point of view and from our perch as one of the leading developers for Apple’s mobile and connected platforms, there’s a lot to love about the new Apple Watch Series 2 and watchOS 3. And much of it has to do with interactions.

How you interact with the Apple Watch has been improved in watchOS 3 in a few different ways. While none of these on their own are earth shattering, together they’ll make using the Watch easier and more delightful than ever.

Also important, the watch’s responsiveness has been dramatically improved. Apple is boasting that app load times have been improved seven times. On the original watch, the poor performance made navigation incredibly cumbersome — to the point where the interaction felt unnatural.

Interaction and “continuity” with other devices

Apple introduced its idea of digital continuity in 2014 with the Yosemite operating system for Mac. The premise: Any experience that might start on one device could end on another. It also means your devices were smart enough to interact with each other — and know you.

Early versions of watchOS were great at interacting with the iPhone, but that was about it. With watchOS 3, your watch can automatically unlock your computer when your watch is in Bluetooth range of it. You no longer need to re-enter a password. With continuity features like this, the watch starts to become the manager of your digital — and even physical identity — by interacting with a variety of other devices. You can already use it to make payments at Apple Pay supported registers, to get through airport security scanners and to get into sporting events. Because it knows you, it could eventually be used as a key to open your house, your car and your office. The technology is getting close to the point where the smart watch could eliminate the need to carry a wallet, passport, or keys.

Killer apps that interact with one another

One of the biggest surprises at last week’s Apple press event was the announcement of Pokémon Go for the Apple Watch. Regardless of your perspective on Pokemon Go, there’s no question it’s been a game-changer for our industry and how we perceive the augmented reality opportunity.

But the most interesting aspect of Pokemon Go on the Apple Watch is how it interacts with the built-in fitness app. While you are tracking nearby Pokemon, hatching eggs and collecting items, you can also see how many calories you are burning and how much distance you’ve covered. The interaction between the two apps is fascinating in that it showcases the impact of joint digital-physical interaction and the positive benefit of it: exercise.

Expect to see many more examples of smart watch applications that “interact freely,” as HP stated in 1977, with other apps and other devices.

I proudly wore the HP-01 for a few years before it wound up in a box in my garage. I unearthed it earlier this year after Apple announced watchOS 3 at WWDC. Not surprisingly, you can buy one on eBay, but it’ll cost you more than the Apple Watch.

It truly was a marvel of engineering. Just as the Apple Newton was a precursor to smart phones, the HP-01 forever deserves a place on the smart watch family tree. The full name of the “HP-01 Wrist Instrument” gave a hint of HP’s core market at the time. The company served businesses by selling server equipment and measurement instruments before there was a consumer market for PCs — and nearly four decades before there was a market or ecosystem for smart watches.

Interestingly, the HP-01 product marketing team never used the term “smart watch” to describe its device. They probably knew better. A smart device, after all, isn’t necessarily smart because of its chipset or its on-board logic. To retrofit some of HP’s 1977 language for today: A smart watch can be truly smart when it “interacts freely” with other things. Only then will the “full potential be realized … and significant new capabilities be made available.”

ArcTouch has been building applications for phones, tablets, smart watches and other connected things since the dawn of the original App Store. If you have an idea for a smart watch application, let’s talk — we’d be happy to provide feedback, share our experiences, offer advice or help in any way.