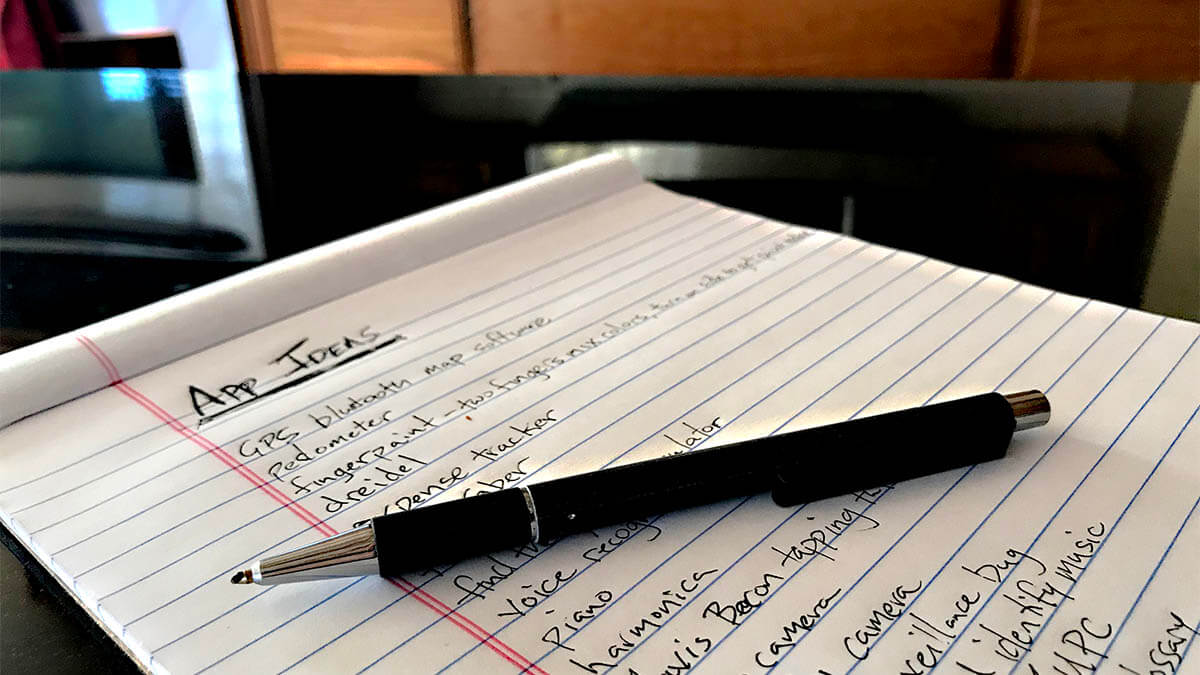 It was just an ordinary piece of paper. And there was nothing memorable about the pen that we used that afternoon more than ten years ago (in fact, I don’t remember anything about it). However, the app ideas we jotted down during that brainstorm were pretty ingenious, or at least that’s what we thought at the time. But really, the most extraordinary thing about that brainstorming session was the news that sparked it.

Ten years ago this week, Apple launched the original App Store as part of iPhone software version 2. The App Store was rolled out to the millions of iPhone users on July 10, 2008. By then, my best friend, former college roommate, and current business partner Eric Shapiro and I already had a list of 38 app ideas.

The spark that ignited our brainstorming happened in March of 2008 when Steve Jobs announced that the App Store was coming during an Apple software roadmap meeting.

It changed my life.

In March of 2008, Eric and I were working at a computer graphics startup, which developed technology to improve the quality and rendering time for ray-traced images. Eric was the CEO and one of the co-founders, and I was the head of product and marketing. We’d previously worked together at another startup called Zero G, which was later acquired by Rovi. But our relationship goes all the way back to college, when we were fraternity brothers and roommates at Tufts University.

Brainstorms were nothing new for us. Going back to our college days, we were technology nerds (as an example, Eric took great pride in possibly being the very first person to purchase an Apple Newton). And over the past 30 years of friendship and collaboration, we’ve often spent evenings dreaming about the next big thing — and related business opportunities.

“So we decided — and to some extent the industry decided for us — that we should build a business creating apps for the iPhone that were free for users.”

Of course it’s easy to say it now, but the brainstorm we had that afternoon shortly after the App Store announcement felt different. We’d both spent time at Apple, and throughout our careers we’d worked as software developers, product managers and evangelists for new technology.

We saw the future — and it was apps. A personal computer in your pocket, powered by great software. Mobile experiences to be defined. And entire businesses and industries built around this opportunity.

I remember the brainstorm vividly. Eric and I were standing on either side of the kitchen island in my home in Menlo Park. And the ideas were flowing so fast that I had a hard time capturing all of them.

Before the end of that brainstorm, that ordinary piece of paper had at least 25 ideas for apps. Sadly, I didn’t keep the piece of paper (sorry readers, the image above this post is a re-creation). We quickly transcribed those ideas into a digital document — and added several more ideas over the next few months leading up to the official App Store launch.

We’re pretty proud of some of the ideas. A few of my favorites (unedited) include:

And well, there were some bad ideas. Take a look at our whole list of 2008 iPhone app ideas and decide for yourself whether we were genius or naive (or somewhere in between).

Later, we would go on to build one of the apps on our list as a passion project — the iGevalt Dreidel app (now in its second iteration, featuring augmented reality).

Many of these ideas exist today in the millions of apps for Android and iOS, but they weren’t made by us. As it turns out, the real business opportunity wasn’t exactly what we thought it was on that afternoon.

The value of free

When the App Store was launched in July 2008, many people rushed to build apps because of the perceived opportunity to sell them.

Eric had spent a lot of time working with enterprise software, where a single sale would be in the thousands of dollars. My experience was in consumer software. I’d recently led product management for Roxio’s digital media software (Easy Media Creator for PC and Toast for Mac), where prices were typically $99 or less.

We believed the App Store would be for software what iTunes was for music. And we, like a lot of people, assumed that people would be willing to pay a decent price in order to download apps.

That, of course, was not a good dynamic for creating a healthy business by selling software. However, we were still convinced there was a business in developing great apps. The iPhone, after all, was a computer in your pocket. But it needed software to bring it to life.

So we decided — and to some extent the industry decided for us — that we should build a business creating apps for the iPhone that were free for users. We believed that companies would eventually see the important role mobile could have in the digital lifestyle — and how providing their customers with useful and delightful (free) app experiences could increase the value of those relationships.

We, of course, weren’t alone in our optimism. On stage at the 2008 App Store announcement, famed venture capitalist John Doerr of Kleiner Perkins told the audience, “There’s never been a better time than now to create a new company for a revolutionary new platform.”

And so, we became app consultants, specializing in helping companies create meaningful connections with customers through mobile apps.

That is how ArcTouch was born.

After our brainstorm and the launch of the App Store, we started pounding the pavement with friends and colleagues in our extended network about the app opportunity. In parallel, Eric spent time digging into iPhone software version 2, building proof-of-concept apps.

We effectively became unpaid Apple evangelists, because we fundamentally believed in the idea of great software experiences for the iPhone. We just had to find customers that bought into our vision — and were willing to fund app development projects.

In February 2009, we officially opened for business. We rented part of a garage in a live/work loft at 3rd and Townsend Street in San Francisco, put up a website, and hired our first two engineers, including a smart young coder named Paulo Michels, who is now our EVP of Engineering.

By June 2009 we had our first client, Merck, and by end of the summer we had signed contracts with Honeywell, Champs Sports, and American National Insurance Companies. The rest, as they say, is history.

ArcTouch cofounders Eric Shapiro (left) and Adam Fingerman (right) hatched the idea of an app consulting firm shortly after the introduction of the App Store.

It’s hard to encapsulate all that’s happened since in just a few words. The ArcTouch team has grown to more than 150 people. Android joined the market, followed by the IoT, with smart “things” that are all interconnected. Now augmented reality, AI and home assistants like Amazon Echo and Google Home are changing (again) how we as humans interact with the digital world.

And the best part is that I’m still working with my best friend and co-founder Eric, steering a business dedicated to creating incredible digital experiences for some amazing companies.

Life offers up a handful of truly defining moments.

Like the first time I met Eric, when we were both nerdy college freshmen at Tufts, just trying to understand what our Engineering 101 professor was explaining.

There was the day I was supposed to get married — September 16, 2001, in New York City. We had to cancel the wedding because of the terrorist attacks five days earlier. Instead, we had a small ceremony at a lake in Connecticut, then took our honeymoon, and “renewed our vows” about a month later with family and friends. We’re as happy as ever, nearly 17 years later.

And experiencing the birth of my two children — and watching them grow, trying to take it all in as time seemingly accelerates. I hope they’ll fondly remember the trips they took to “Daddy’s office in San Francisco” — which sometimes included “testing” new apps on the AppleTV and always involved raiding the company snack bar.

No doubt, the introduction of the App Store ten years ago is also a big part of my story. Even that afternoon when we wrote down our app ideas on that ordinary piece of paper with that forgettable pen, I had a sense that this news was going to help define me.

The App Store and subsequent app revolution have given me a professional purpose that I love. And the best part: It gave rise to a global company that has provided jobs for so many great people.

ArcTouch now has more than 150 talented strategists, designers, and engineers located in our main offices (in San Francisco and Florianopolis, Brazil) and sprinkled around the world. We like to say we’re “dreamers, thinkers and builders.” We’ve designed and developed more than 400 commercial applications — and we are constantly thinking and dreaming about the potential impact of the latest emerging technologies like blockchain, augmented reality, and AI powered voice assistants. We love what we do. And it all comes back to one thing: apps.

So, happy 10th anniversary to the App Store. Congratulations to our friends at Apple! I’m grateful for and humbled by the opportunity to be a part of this app revolution.