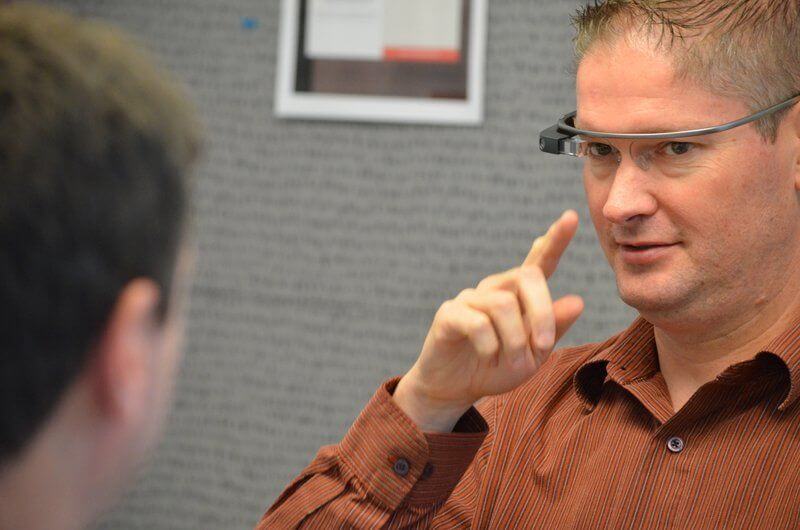 While Apple’s WWDC dominated headlines last week, there was another show in town. One where speakers and exhibitors took MUCH bigger leaps into what the future of tech may be. GLAZEDcon 2014, held in San Francisco’s Regency Center, was a showcase for all things Wearable.

As you might expect, there were plenty of eye-catching demos. After a couple days of watching sessions, checking out the exhibits and talking with some of the pundits, I came back to the office with three high-level takeaways.

1. Wearables are Still in Their Infancy

Health and exercise trackers are probably the most mature category of Wearables, and the prevailing thought is these will be replaced by more sophisticated multi-purpose devices.

At GLAZEDcon, much more attention was paid to ideas like a smart home, where locks open  and lights turn on as you approach the front door, and devices that give feedback based on body posture — even brain tracking hardware. As one speaker commented, we’re in the Atari phase and we’re trying to get to the Xbox 360. There is also a strong sense that everyone is just waiting for Apple to take the lead in the category. (Related: Is Apple’s Swift a step toward a wearable watch?)

2. Big Data Could Be a Big Deal (or Just an Ordeal)

Big Data could be at the center of some killer wearable apps, but there are some slippery slopes that need to be negotiated around privacy. Consider the companies that have provided Fitbits to employees to promote wellness. Seems like a progressive idea, but given that the Fitbits are company issued devices, who owns the data? How tempting would it be for a company to use that data against challenging employees?

In the healthcare industry, it could be tremendously valuable to integrate personal data from fitness devices with electronic health records. At a societal level, experts could more accurately correlate activity levels to certain medical conditions — but how many people would feel comfortable sharing data about their personal activities? Heading down that slope a little further, imagine a workplace where everyone wears company-issued wearables. You’re in the midst of a tense meeting, and working hard to influence the decision makers when the person across the table tells you that your heart-rate just surged and asks if you really believe in what you are saying.

As Plantronics CTO Joe Burton noted in the Wearables in the Workforce panel, the goal of wearables should be “making a better version of ourselves, but not running our lives.” Defining the boundary between the two won’t be simple.

3. Context Needs to be Redefined

Mobile strategists like to use the term “context” to describe the characteristics and current state of a given mobile customer or user. Today, context is pretty much limited to where people “check in” with their mobile phone. Some early applications developed for brick-and-mortar retail store visitors (using iBeacon technology) are effectively spamming customers with pop-up ads without much intelligence beyond their physical location in the store. If that superficial context continues, users are more likely to delete the app than make a purchase.

There is a lot of brainpower being devoted to deeper customer profiling needed to drive smarter kinds of engagement. Part of that could be allowing users to create their own profile and set preferences — much like ESPN’s ScoreCenter or REI’s Snow Report. And if you take that user-created profile, and layer in customer location and some historical purchasing data, vendors would have a much better chance of predicting the kind of offers and experiences customers would appreciate.

Sidenote: The Death of Business Cards

After GLAZEDcon, I came back to the office with lots of ideas for ArcTouch. But for the first time ever, I left a conference without collecting a single business card. In fact, no one even asked me for a business card. It shows how mobile tech really is changing things. I have 22 new contacts on LinkedIn — added on-site directly into my phone — and no trees were harmed in the process.