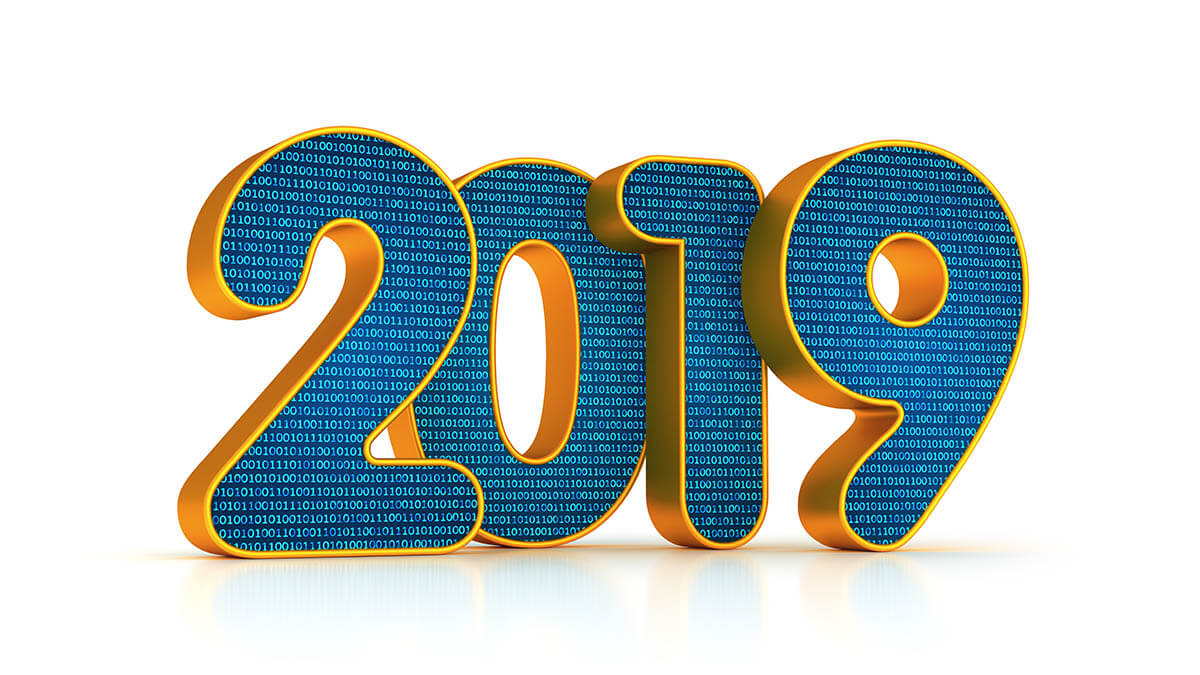 7 mobile and blockchain trends to watch in 2019

It’s been quite a year in mobile and blockchain. The original Apple App Store turned 10 (a milestone that led to the rise of ArcTouch), while Android also celebrated reaching the 10-year mark. Voice assistants like Alexa have rapidly become the new normal in many of our homes. Augmented reality technology is maturing quickly, enabling developers to create new classes of mobile experiences (AR will gain even more momentum with the upcoming release of Harry Potter: Wizards Unite). And decentralized apps (dApps) and blockchain development have gained tremendous mindshare among tech pundits because of the technology’s massive potential to disrupt how we do business today.

We couldn’t be more excited about what lies ahead in 2019. And from our humble perch as one of the leading app developers and blockchain developers, we’re happy to share our thoughts on what we believe will define mobile, blockchain, and smart products of the IoT over the next 12 months. Here are seven trends to watch:

When industries mature, it’s common for the products to become more niche-focused over time — serving the needs of more specific audiences. The same will become true for the mobile phone. Samsung and Huawei are both close to releasing phones with foldable displays that can expand to tablet size. Meanwhile, bucking conventional thinking that bigger screens are better, some manufacturers are offering new smaller form-factor phones. Even Apple, a company that historically has focused on fewer products, currently has four pretty different iPhone models to appeal to different target customers.

With a maturing infrastructure (including the upcoming 5G rollout), the IoT also lends itself to many different types of new specialized mobile products. The range of IoT devices has almost no bounds, from smart cars and scooters to HVAC and lighting systems, and even to eyebrow-raising “innovations” like connected underwear and dental floss.

Perhaps there’s no better example of how a maturing industry leads to niche device proliferation than Amazon’s Alexa. When Amazon introduced the original Echo with Alexa onboard in 2014, many were confused (“So, it’s a speaker that I talk to?”). But by the end of 2018, as many as 50% of U.S. households will have a home assistant. And Amazon, the company largely responsible for this trend, subsequently introduced a whopping 15 new Alexa-powered devices during a September press conference this year.

For businesses building connected experiences, development teams need a thorough understanding of the growingly complex device ecosystems — and expertise in the interaction of these smart IoT devices.

With all the data stored on a mobile phone and its associated cloud service (e.g. Apple’s iCloud), security of personal phones is a growing problem. From theft of physical devices to phone hacking, expect this problem to get worse before it gets better. A recent sensational example: A 21-year-old reportedly hacked into the phones of multiple Silicon Valley executives. And he allegedly made off with $1 million in cryptocurrency from one of them.

Apple and Google are likely to address this problem via new operating system safeguards in iOS and Android. The two mobile giants may also make more stringent security requirements for applications, focusing on how those applications encrypt personal data. And major cell carriers may implement stronger measures to prevent SMS highjacking (porting).

Meanwhile, expect financial institutions and email services to begin recommending against using SMS as a two-factor authentication system or password recovery mechanism — since the phone is the weak link — in favor of stronger biometric methods like face recognition.

3. Apple will make a stronger play in the home

It seems that with every recent Apple press event we anticipate that the world’s most valuable company will make a strong play for the home assistant market. And, well, we’ve been consistently let down. Apple’s $349 HomePod, with Siri onboard, is an impressive product — if you like music. But with the hefty price tag, it’s not competing with Amazon’s Alexa. By comparison, the Echo Dot was priced as low as $20 during Amazon’s recent Black Friday Deals Week campaign. (So, you could buy 17 Echo Dots for the price of a single HomePod.)

Meanwhile, Google is gaining real momentum in this market, too. Google Home Mini (with the Google Assistant) is available for $50 — and Google has partnered with Spotify to provide a free Google Home Mini to Spotify family subscribers.

Meanwhile, Apple has done very little to gain a foothold in the connected home. 2019 will be different. Expect the world’s largest company to make a big splash in the home this year with Siri at the center. Whether it’s a lower-priced HomePod or an entirely new product, Apple will do something. We hope.

Every few years, someone suggests that native mobile apps are dead because everything is moving to the mobile web. We don’t believe this will happen. Even with all the advancements in browser and web-based app technology, the user experience consistently falls short compared to native apps. Additionally, unless there’s a consolidation of technologies between industry giants Apple and Google, there’s no way to take advantage of device-specific hardware features with device-agnostic web technology.

But we expect that the development of progressive web apps (PWAs) might, instead, reduce the amount of time spent on the mobile web. PWAs offer a more native-like app experience — a full-screen, immersive experience, including some offline capability. Also, the emergence of Instant Apps allows Android users to find and try a slice of a native app before they download those apps.

Both PWAs and Instant Apps are great for the early stages of a customer journey — when a user is learning about a brand, product or service for the first time. They can do a Google search and easily find PWAs and even try Instant Apps before committing. And once those users are ready to take the “relationship” with the brand to the next level, that’s when they’ll download the fully native app to get the best possible experience.

The mobile industry is anxious for 5G to arrive. It promises faster speeds and lower latency — allowing developers like us to build more immersive experiences for mobile. In particular, combining the higher-speed 5G with augmented reality opens up much richer experiences that current networks simply can’t support.

But don’t expect to be living the 5G dream in 2019. While the network infrastructure is starting to take shape, and some early 5G phones will be released this year, it’ll take a few years before there’s widespread hardware adoption. And even then, the applications to take advantage of it will likely lag behind the hardware. Those who are hoping 5G will replace WiFi in the home might be disappointed. With so many home-based IoT products that have WiFi chips built in, it would take several years for 5G to fully replace WiFi in the home — if ever. As this EDN story explains, there’s no compelling reason to distribute 5G in the home when most of the devices have WiFi chips. Although maybe we’ll start seeing a new crop of 5G-enabled WiFi base stations from Cisco, Netgear and other network equipment manufacturers.

However, one area we expect more of an immediate impact from 5G is where industrial applications intersect with the IoT. In 2019, we could easily envision some compelling niche applications driven by 5G that enable more efficient manufacturing, field service monitoring, and supply chain management. In fact, many see 5G as an enabler of the “factory of the future,” something the enterprise mobility and blockchain teams at ArcTouch are looking forward too.

6. Blockchain will find a killer (app), and the commercial rush begins

We love blockchain development. And there are some pretty compelling early projects underway (contact us to learn about the proof-of-concept (PoC) blockchain applications we’re building). But the reality is that there’s more hype today than commercial deployments — because many companies are struggling to understand the return on an investment. In 2019, that will start to change when real-world use cases illuminate blockchain’s potential to disrupt industries.

We predict something like this scenario will unfold next year: A major grocer, possibly Walmart, uses its blockchain pilot to quickly and definitively identify the specific source of a national food contamination. For example, blockchain could have spared a lot of sickness and pain from the recent E. coli outbreak in romaine lettuce. Not to mention the expense of the FDA’s broad recommendation to destroy all romaine lettuce on the market. All because the agency couldn’t identify the specific source and extent of the problem.

Enter blockchain. It can efficiently track the journey of produce all along the supply chain, from farm to table, through the decentralized ledger technology. A public health crisis is averted. And the buzz about the events accelerates adoption of blockchain across a wide range of related companies and industries.

So, about that niche mobile device trend… 2019 would be the perfect time for Nintendo to enter the mobile phone market. Many people who have grown up playing Super Mario Brothers and Donkey Kong on Nintendo’s portable GameBoy or DS would love to get their hands on a Nintendo phone. Perhaps a Nintendo phone will come as the next evolution of the highly popular Switch. But if the gaming giant gets into the phone space, it’s more likely to be some kind of partnership. One rumor suggests Nintendo and Samsung may be working on a phone with a foldable screen. And the company also filed a patent that reportedly turns a phone case into a GameBoy.

What’s your prediction for mobile, blockchain, and the IoT in 2019?

This time of year, we like to look ahead and anticipate the trends that’ll affect our business and define the future of mobile, blockchain, and the IoT (see what we said for 2018, and some “interesting” predictions we made for 2016 and 2015). But what do you think? Tweet to us using #2019TechTrends and let us know your predictions for 2019.