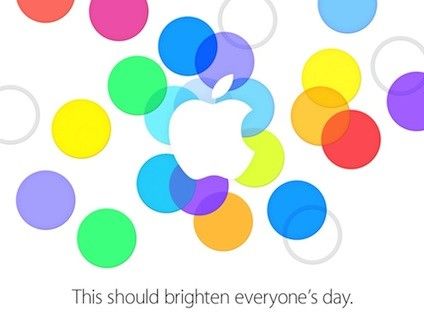 Invitations have been sent for a September 10th Apple event that “should brighten everyone’s day.”
It is widely expected that this will be the formal public launch of iOS 7 as well as new iPhones and iPod touch devices. Industry experts believe that there will be a several models introduced with various price points and colors, including some speculation of a gold colored phone.

iOS 7 has a completely new visual style, with colors and fonts that are cleaner and simpler, and subtle motion effects that transform the look and feel of the device.

iOS users upgrade quickly to the latest operating system. One analysis of iOS 6 saw 15% adoption within 24 hours; 25% after 48 hours; and 61% after one month.  Apple recently reported that over 93% of users are running iOS 6.

You can expect a similar rapid adoption of iOS 7 when it is released.

Companies will want to migrate their apps to iOS 7 very quickly. When iOS 7 is released virtually all iOS 5 and iOS 6 apps will suffer from UI glitches that will appear as bugs to the end user, and some apps will stop working entirely. Almost all existing apps will look “out of place”, and over time as consumers get used to iOS 7, these apps will appear hopelessly antiquated.

Don’t let your app be left behind with last year’s look and functionality. Companies and organizations that create exemplary iOS 7 apps first will have a considerable opportunity to leapfrog their competition and expand their customer base.

ArcTouch has an expert iOS 7 app development team for hire. We can help you get started today.