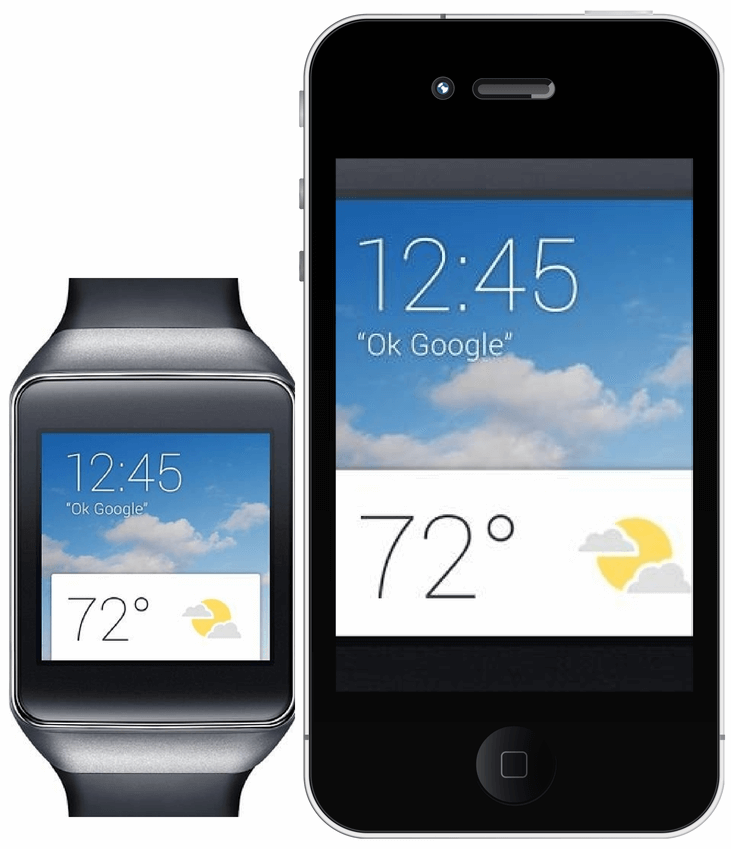 Can Android Wear Work with an iPhone?

I’ve been using the Samsung Gear Live watch since Google I/O — and I love it.

After Android Wear was unveiled, I wrote about how Google and Apple were approaching the IoT (Internet of Things) slightly differently. From a user point of view, experiences will be similar: New devices like a smart watch allow you to engage with a subset of information available on your phone or computer.

But at the system level, Android Wear devices are an extension of your Android Phone, and all heavy lifting (app logic, communications, etc.) happens on your phone. We expect that Apple will instead use its Continuity approach to synchronize activities between standalone apps running on a watch, iPhone, or iPad.

Turns out, I was partly wrong. It’s true that the majority of Android Wear apps do most of the work on your phone, and the Android Wear watch can communicate status and take simple actions. But you can actually install standalone apps that run exclusively on Android Wear watches. For example, you can install a calculator — and as long as you have teeny tiny fingers to push the calculator’s buttons, you can use the app without having an Android Phone at all.

This got me thinking. There are hundreds of millions of iPhone users that might just want an Android Wear watch. Could I find a way to make them work together? The entrepreneur and gadget geek in me thirsted for an answer. So I dove in.

During my first experiences with the Gear Live, Android Wear performed just as I originally thought: The watch appeared to be little more than an extension of my phone.

The interaction between my watch and phone was fairly smart. I could take any simple action on my watch, and the same would happen on the phone. I could dismiss a notification, reply to a text (caveat: voice recognition through the watch wasn’t as good as Siri), and archive an email on my watch and my phone would stay in sync. And vice versa:   Anything I did on the phone was reflected on the watch.

Next, I decided to download a new watch face, and there were a bunch already available. My favorite was one that allowed me to set the background to be my company logo. After I installed it, the face automatically pushed to my watch.

Then I looked at the watch’s built-in heart-rate monitor and pedometer. Though fairly straightforward applications, all the processing took place exclusively on the watch. It was smarter than I thought! That made me wonder: What else could be done on the watch itself? And, if part of the value in Android Wear is in extending phone notifications, what would it take to get iPhone notifications on Android Wear?

My next thought was that maybe our brilliant ArcTouch mobile software engineers could create an app for iOS that simulates the communication on an Android phone. We could look at the data streaming back and forth over Bluetooth and try to replicate it.

But in doing some initial research, we came to the conclusion that this is a terrible approach. The communication at that level is not only very complex, but encrypted. With the exception of notifications, every app could use its own protocol to talk between the phone and watch. Any changes to app-specific protocols would too easily break any hack.

A Two-Pronged Solution To Make Android Gear Work With iPhones

With one flawed idea ruled out, we broke down the challenge into two distinct problems:

Getting a Common App on Android Wear & iPhone

To start, we revisited the fact that an Android app could live on a watch without a companion Android phone. It’s limited in memory and in screen size, but it actually runs the Android OS. So, we could develop a Google Play like store that would run on the watch, and it would allow you to get an app directly onto the watch.

But simulating Google Play (and using the same back-end Play servers to get the apps) is way too difficult. Instead, we might need to create our own app store, like the Amazon Kindle Fire has done. So, theoretically possible.

Instead of hacking the communication that an Android phone does via Bluetooth, what if we were to write a lightweight app that runs in the background on an Android Wear watch and communicates to iOS in the proper way? It’s not that hard, In fact, this is exactly how platform agnostic smart watches like Pebble already work. Again, doable.

This is the most complicated bit. An Android Wear watch looks for a low-level connection with an Android phone to receive any notifications or information from the Internet. Without that low-level communication, the watch would ultimately think there is no connection.

To solve that problem, we would need to get firmware for the Android Wear OS itself. We’ve seen tools available that would unlock the bootloader and help us get the firmware. And at some point we may be able download the open source of Android Wear and compile it. Then we could identify and intercept these low-level connections from an Android phone and instead send them to the iPhone.

We might also use the iPhone as a generic Bluetooth tether. Or we could have the Android Wear watch communicate with a specific app running in the background of an iPhone, waiting for inbound queries and communication from the watch to send those off to the Internet.

But my bet is this: Before anyone can release a viable solution to help iPhone work with Android Wear devices, Apple will have announced its own watch. And this investigation, while interesting, will be mostly moot.