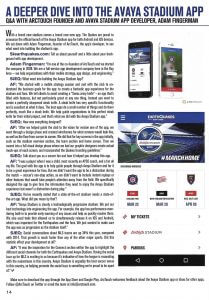 With a brand new stadium comes a brand new new app. The Quakes are proud to announce the official launch of the Avaya Stadium app for both Android and iOS devices. We sat down with Adam Fingerman, founder of ArcTouch, the app’s developer, to see what went into building the stadium’s app.

SJearthquakes.com: Tell us about yourself and a little about your background with app development.

Adam Fingerman: “I’m one of the co-founders of ArcTouch and we started the company in 2008. We are a full-service app development company here in the Bay Area — we help organizations with their mobile strategy, app design, and engineering.”

SJEQ: What went into building the Avaya Stadium App?

AF: “We started with a mobile strategy session and met with the club to understand the business goals for the app: to create a fantastic app experience for the stadium and fans. We tell clients to avoid creating a “Swiss Army knife” – an app that’s filled with features, but not particularly great at any one thing. Instead you want to create a perfectly sharpened steak knife. A steak knife has very specific functionality and is excellent at what it does. The best apps do a small number of things and do them perfectly, much like a steak knife. We help guide organizations to this perfect steak knife for their initial project, and that’s what we did with the Avaya Stadium app.” 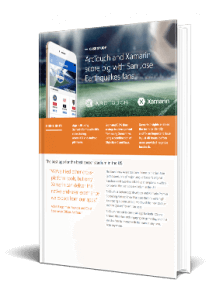 EBOOK: Read how we used Xamarin development to build the Avaya Stadium app for the San Jose Earthquakes.

SJEQ: How was everything designed?

AF: “After we helped guide the club to the vision for version one of the app, we went through a design phase and created wire frames for what screens would look like, as well as the flow from screen to screen. We did that for key screens in the app initially, such as the stadium overview section, the team section and home screen. Then we moved into a full visual design phase where we had our graphic designers create actual mock-ups of each screen, and incorporated the Quakes’ branding guidelines.”

SJEQ: Talk about you as a soccer fan and how it helped you develop this app.

AF: “I was a player when I was a child, most recently an AYSO coach, and a fan all my life. The goal with the app is to help guide people through Avaya Stadium and for it to be a great experience for fans. But we didn’t want the app to be a distraction during the match — soccer’s non-stop action, so we didn’t want to include instant replays or other features that would take people’s attention away from the field. We specifically designed the app to give fans the information they need to enjoy the Avaya Stadium experience but wasn’t a distraction during play.”

AF: “Avaya Stadium is clearly a technologically progressive stadium. We put our best technology into engineering the app. For example, the app has performance-monitoring built-in to provide early warning of any issues and help us quickly resolve them. We also used tools that allowed us to simultaneously release it on iOS and Android, which was important for the Earthquakes and the fans. We just wanted to make sure the app was as progressive as the stadium itself.”

SJEQ: Social conversations about MLS teams are up 34% this year, compared with 2014. That growth is much faster than any of the other major sports. Did this statistic affect your development at all?

AF: “It was the inspiration for the Connect section within the app to highlight the different social channels for both the Earthquakes and Avaya Stadium. Having the social buzz up for MLS is exciting to us because it’s indicative of how the league is resonating with the mainstream in this country. Avaya Stadium is arguably the best soccer venue in this country, so helping promote the social buzz is something we’re proud to be a part of.”

Make sure to download the app through the App Store and Google Play. ArcTouch welcomes feedback about the Avaya Stadium app or ideas for other apps. Follow @ArcTouch on Twitter or email the team at hello at arctouch.com.