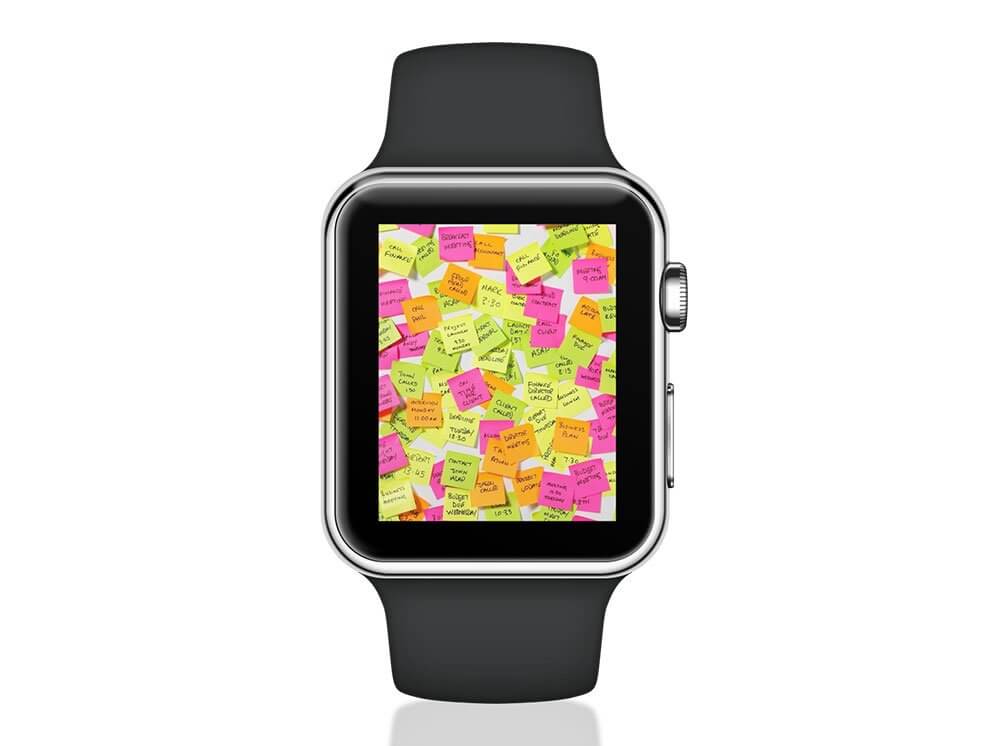 Dear Developers, Let’s Not Screw Up the Apple Watch With Dumb Notifications

I have a love/hate relationship with mobile phone notifications, and I know I’m not alone. It’s complicated for me because of my years working in the mobile industry. And this week, it’s about to get a whole lot more complicated when the Apple Watch arrives on a wrist near you.

In the early 2000s when I was busy cobbling together J2ME and BREW applications (which seems like the stone ages now), getting a unique alert on your cell phone meant you’d set up a customized ringtone. A mechanism to share an interesting, important and/or timely tidbit of information? All from an application you downloaded to your phone that was quietly running in the background? Pure fantasy.

Clearly, a lot has changed. Most notably for this blog post, Apple’s Push Notification Service was introduced in 2009. And now, if you’re like me, you may spend more time every day reading, managing and acting on your notifications than you do reading books or watching movies.

“The success or failure of the Apple Watch will largely be defined by the apps and the developers that make them. Let’s not screw it up with a bunch of dumb notifications.”

And this is where the love-hate part comes in. For app developers, there’s a fine line between pushing useful information to users phones’ vs. being just plain pushy. It’s always a high-wire act to balance our clients’ desire to increase usage for their apps, without compromising the overall user experience. Studies have shown a clear correlation between increased push notifications driving increased engagement in apps. But we also know — though it’s much harder to measure — that notifications gone wrong are annoying and drive customers away.

However, like other smart watches, much of the core value proposition of the Apple Watch is realized through push notifications. As developers, if we’ve had a hard time navigating that fuzzy line between useful and nuisance notifications on a phone screen, it’s about to get magnitudes more difficult on an Apple Watch screen that’s a fraction of the size. There will be conflict, noise, and failures — and Apple Watch app developers needs to test what works and what doesn’t.

So, as an app developer, where do we start with best practices for Apple Watch notifications? From what we’ve previously learned about what works on the phone screen and scaling back from there.

Do This – Helpful Apple Watch Notifications

When I think about the most useful notifications I receive on the phone, I think first of the messages that have an importantly timely element. And if they are timely AND they suggest some obvious action on my part, that puts them squarely into the helpful category. Here are some examples that meet one or both of those criteria.

Your event is about to start.

A calendar or event app sends a push notification to remind you of an event you have been invited to but have not responded to. Or, you get an alert that an event is about to start. These types of updates are almost always useful — and make sense as reminders on a watch or phone screen.

Your medications are ready for pick up.

An app sends prescription alerts to remind you that it’s time to re-order, or that your auto-refill prescriptions are ready to be picked up. Like the event reminders, this kind of notification is a perfect fit for a watch screen since it’s time based.

If you haven’t performed an expected action yet, an app sends a friendly reminder. An example of this might be a food diary app that sends a push reminder when you didn’t log your lunch and it’s 6 p.m. Social games like Words With Friends also send notifications when it’s your turn in the game.

@Jason – Do you have the logo for the homescreen design?

A messaging app sends a notification when a contact pings you or there’s a new entry on one of the topics you follow. We’re big users of Flowdock here at ArcTouch as a way to group chat about our active projects. If a colleague is blocked and needs a quick answer about a project, seeing an alert on a watch screen could prompt me to more quickly respond and keep things moving.

You learn the winner at the end of Sunday’s Indy Racing League event, or you might find out that the pitcher on your fantasy baseball team was just placed on the disabled list. Most of the time, these updates are useful — and would be welcome on the Apple Watch.

The examples that embarrass me as being someone who makes apps for a living:

A notification tells you that you haven’t opened an app for a month. Whenever I see a notification on my iPad that I haven’t  played a game in a while it makes me think “Oh yeah… I haven’t played Shoot ‘em Up Armadillos. Why do I still have it?” The next action is the WORST thing that can happen to an app — it gets uninstalled. If you’re the business of the offending notification, you just lost a customer.

You should try our revolutionary new feature.

An app you haven’t used for a while sends you a tip for a new feature via a notification. There’s a growing number of these kinds of messages — and it’s becoming more like unwanted email spam — only worse because it is much more visible on a phone and watch. If you want to show your users a tip about a new feature, do it when people launch the app the next time. And if they haven’t opened the app for a while, send them a friendly email reminding them about all the great new features. If you try to engage the unengaged in a notification, expect more uninstalls.

You find out from your fantasy baseball app the Braves outfielder B.J. Upton changed his first name, as chronicled in this post by long-time tech reporter Steven Levy. In sports and news apps, there’s potential for pushing all kinds of useless information — especially on a watch screen. Be smart about leveraging your user data to offer up more relevant notifications.

Here are 15 messages in full from the past 3 minutes.

You get bombarded with vibrations as a chat thread explodes with activity. We like notifications from our messaging app Flowdock. But if there’s a thread with 15 entries in 3 minutes, it will be overwhelming if each is pushed to a small watch screen. Developers should use a back-end queue to group related messages, sending only the first in a defined period of time to the intended screen.

In Closing: The Apple Watch is Pretty Cool. Let’s Not Screw It Up

As Apple says, the Apple Watch is the “most personal” device it has made ever made because of where it sits on the body: your wrist. A bunch of misguided notifications would certainly make it feel less personal. Through no fault of Apple’s, all the positive features could easily be forgotten if Apple Watch notifications become overwhelming or too difficult to manage.

As developers, we need to think hard about the kinds of Apple Watch notifications we implement in each app. When challenged to increase app engagement, we shouldn’t default to “let’s add a bunch of notifications.” We should also make it super easy for the user to change the notification settings — within the apps themselves. It’s a much better outcome if a user downgrades her notifications than uninstalls the app. Last, we should pay close attention to what’s happening with notifications. Is it really driving engagement? What about uninstalls? Make every effort to measure the effect of your app’s notifications.

Like the iPhone, iPad and the ecosystem of Android devices, the success or failure of the Apple Watch will largely be defined by the apps and the developers that make them. Let’s not screw it up with a bunch of dumb notifications.

Jason Ling - Jason Ling (@the_ling) is a product manager at ArcTouch and has 13 years experience working with web and mobile technology.