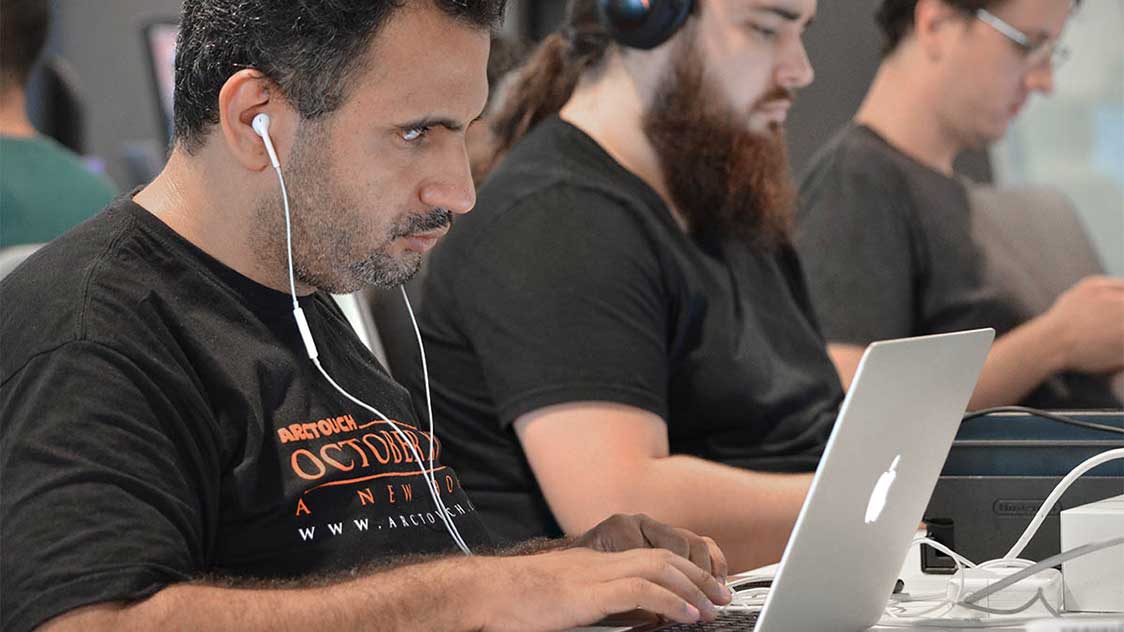 [Editor’s note: This is part of a series of articles about app makers, highlighting ArcTouch’s talented team members. Like many members of the maker movement, the app makers we spotlight crave getting their hands on the latest tech or finding creative new ways to apply technology to their projects.] 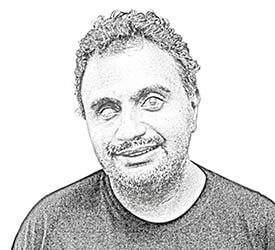 Twelve years ago, Alexandre Costa’s world became completely fuzzy — quite literally. He suffers from glaucoma, a visual disorder he’s had from birth that slowly eroded his peripheral vision. By 2006, at the age of 28, glaucoma had stripped away all of his sight, leaving him completely blind.

“I have some light perception, but I can’t see things as they are,” he says. “All the world is a mess of light and dark colors.”

Fast forward to today. Costa, a software developer for ArcTouch who specializes in Xamarin, will turn 40 this month. That’s a milestone birthday for many. But for Costa, it means he’s lived nearly one-third of his life without the ability to see. What’s remarkable is his chosen career path: He’s become an expert mobile software developer in world filled with screens. Screens that he can’t see.

“Alexandre has made his visual impairment an asset,” says ArcTouch EVP of engineering Paulo Michels. “He doesn’t make certain assumptions about the code he writes or the user experiences we create — he ‘sees’ things differently, and that’s tremendously valuable. Of course, his value goes far beyond his work — spend a few minutes talking with him, and you’ll walk away inspired.”

Being an inspiration, of course, doesn’t make you a great software developer. Long before he joined ArcTouch’s Brazil-based development team in 2017, Costa became an expert coder, aided in part by using a variety of technology tools to help him overcome his disability. He has been named a Microsoft MVP (Most Valuable Professional) for the past three years for his expertise in Visual Studio — an honor bestowed upon only 4,000 people worldwide. He speaks often at technology conferences — about both the trending issues in the industry and his unique perspective on working as a visually impaired developer.

We recently sat down with Costa to talk about his career and life — and what it’s like to be a software developer, through his eyes.

What’s the most difficult thing about doing your day-to-day job with your visual impairment?

Accessibility is something that people are more aware of today, but accessibility features are still not completely implemented in more advanced tools. Every day, I have to work around some barriers because a button is not labeled or some information is shown using colors or images but without a textual description (that a screen reader could interpret). One challenge I have is the difficulty in merging code. All the tools are very visual, and you have to drag and drop parts from one place to another. So, I tend to focus on coding in the terminal and code editing.

“Every time I receive a message from someone that saw me give a talk, and then started studying accessibility or added a feature to a product or a service, I realize that I am doing something really important.”

What about life outside of work — what’s the biggest challenge you face without your sight?

It’s hard to be completely independent. I need help to find an Uber driver, to overcome challenges with touch-screen equipment that doesn’t have a screen reader, and to do things like walk around in stores and shopping malls.

I know you had some eyesight earlier in your life. Does that make it easier or harder for you now, the fact that you have some visual memories?

It really helps me when I need to understand something purely visual like diagrams or when I am talking to a designer or QA team about a screen in an app. But it is something that I lost very fast. I can’t remember the faces of many of the people I’ve met.

You are a Microsoft MVP. Tell me how you became one and what that means to you?

I am really proud of it. An MVP is a professional that impacts and influences people by sharing knowledge. I started working with technical communities at the same time I became blind — and meeting those people inspired me to move on and bypass my challenges. Today, I try to do the same thing, to help people who are starting their careers, and people with disabilities. Because as Mary Pat Radabaugh (Director of IBM National Support Center for Persons with Disabilities) said, “For most people, technology makes things easier. For people with disabilities, technology makes things possible.”

I know you enjoy speaking at different conferences about accessibility and working with a disability — what makes that rewarding?

Life with a disability isn’t easy — and like the experience I had, you need someone to show you that many things are possible with your disability. Louis Braille unfortunately didn’t live to see his writing method become a standard for visually impaired people — and lot of other progress has been made recently for people like me, and much more will happen. My reward is that I know everything I am doing now can help future generations — even if I won’t see the result, my legacy will be very positive. Every time I receive a message from someone that saw me give a talk, and then started studying accessibility or added a feature to a product or a service, I realize that I am doing something really important.

What advice would you give to companies that are considering hiring a visually-impaired employee?

The best way of learning something new is trying. Most visually impaired people don’t need anything more than a computer with a screen reader and earphones to do their jobs. We are normal people with qualities and defects, just like everyone else. A more diverse team with different backgrounds will make your company much better and more prepared for many challenges.

If there was one thing that you wanted people to understand about being visually impaired, what would it be?

We aren’t superheroes. We are normal people, living our lives as well as we can. We work, we study, we go out with friends, we have relationships, we like to talk, to dance, to have a drink just as any other person would. And if you want to help us, first ask us how, because nobody knows more than us about what kind of help we need.

What is it about being a software developer that’s most interesting to you?

As a developer, I have the great opportunity to create a whole new world by writing lines of code. It is incredible how I can impact billions of people with tools that can make them more productive, healthier, and smarter. With great power comes great responsibility — but I am really proud of being a developer.

You recently celebrated your one-year anniversary at ArcTouch — congrats! Tell me what life at ArcTouch has been like for you?

Really it’s been like a dream come true. The ArcTouch Brazil team here in Florianópolis is great, the projects are awesome and every day is an opportunity to learn about something new — a new client, a new technology, or even a cultural trait of a team member. Since the very first day, I’ve felt at home here.

As you think about your career goals, what’s the one most important thing you want to accomplish in the future?

I really love what I do today — and I think a natural path is to become a tech lead or something like that. I also like researching new technologies — so working more with emerging technology would be great, too.